Monetary policy implies those measures designed to ensure an efficient operation of the economic system or set of specific objectives through its influence on the supply, cost and availability of money.


The concept of monetary policy has been defined in a different manner according to different economists;

R.P. Kent has defined the monetary policy as “The management of the expansion and contraction of the volume of money in circulation for the explicit purpose of attaining a specific objective such as full employment.”

Dr.D.C. Rowan remarked, “The monetary policy is defined as discretionary action undertaken by the authorities designed to influence:
(a) The supply of money,
(b) Cost of Money or rate of interest and
(c) The availability of money.”

Objectives of Monetary Policy:
The monetary policy in developed economies has to serve the function of stabilization and maintaining proper equilibrium in the economic system. But in case of underdeveloped countries, the monetary policy has to be more dynamic so as to meet the requirements of an expanding economy by creating suitable conditions for economic progress. It is now widely recognized that monetary policy can be a powerful tool of economic transformation.
As the objective of monetary policy varies from country to country and from time to time, a brief description of the same has been as following:
(i) Neutrality of money
(ii) Stability of exchange rates
(iii) Price stability
(iv) Full Employment
(v) Economic Growth
(vi) Equilibrium in the Balance of Payments.

Economists like Wicksteed, Hayek and Robertson are the chief exponents of neutral money. They hold the view that monetary authority should aim at neutrality of money in the economy. Any monetary change is the root cause of all economic fluctuations. According to neutralists, the monetary change causes distortion and disturbances in the proper operation of the economic system of the country.
They are of the confirmed view that if somehow neutral monetary policy is followed, there will be no cyclical fluctuations, no trade cycle, no inflation and no deflation in the economy. Under this system, money is kept stable by the monetary authority. Thus the main aim of the monetary authority is not to deviate from the neutrality of money. It means that quantity of money should be perfectly stable. It is not expected to influence or discourage consumption and production in the economy.

Exchange stability was the traditional objective of monetary authority. This was the main objective under Gold Standard among different countries. When there was disequilibrium in the balance of payments of the country, it was automatically corrected by movements. It was popularly known, “Expand Currency and Credit when gold is coming in; contract currency and credit when gold is going out.” This system will correct the disequilibrium in the balance of payments and exchange stability will be maintained.
It must be noted that if there is instability in the exchange rates, it would result in outflow or inflow of gold resulting in unfavorable balance of payments. Therefore, stable exchange rates play a key role in international trade. Thus, it is clear from this fact that: the main objective of monetary policy is to maintain stability in the external equilibrium of the country. In other words, they should try to eliminate those adverse forces which tend to bring instability in exchange rates.
(i) It leads to violent fluctuations resulting in encouragement to speculative activities in the market.
(ii) Heavy fluctuations lead to loss of confidence on the part of domestic and foreign capitalists resulting in adverse impact in capital outflow which may also result in capital formation and growth.
(iii) Fluctuations in exchange rates bring repercussions in the internal price level.

The objective of price stability has been highlighted during the twenties and thirties of the present century. In fact, economists like Crustar Cassels and Keynes suggested price stabilization as a main objective of monetary policy. Price stability is considered the most genuine objective of monetary policy. Stable prices repose public confidence because cyclical fluctuations are totally eliminated.
It promotes business activity and ensures equitable distribution of income and wealth. As a consequence, there is general wave of prosperity and welfare in the community. Price stability also impedes economic progress as there is no incentive left with the business community to increase production of qualitative goods.
It discourages exports and encourages imports. But it is admitted that price stability does not mean ‘price rigidity’ or price stagnation’. A mild increase in the price level provides a tonic for economic growth. It keeps all virtues of a stable price.

In recent years, economic growth is the basic issue to be discussed among economists and statesmen throughout the world. Prof. Meier defined “Economic growth as the process whereby the real per capita income of a country increases over a long period of time.” It implies an increase in the total physical or real output, production of goods for the satisfaction of human wants.
In other words, it means utilization of all the productive natural, human and capital resources in such a manner as to ensure a sustained increase in national and per capita income over time.
Therefore, monetary policy promotes sustained and continuous economic growth by maintaining equilibrium between the total demand for money and total production capacity and further creating favourable conditions for saving and investment. For bringing equality between demand and supply, flexible monetary policy is the best course.
In other words, monetary authority should follow an easy or tight monetary policy to suit the requirements of growth. Again, monetary policy in a growing economy, has to satisfy the growing demand for money. Thus, it is the responsibility of the monetary authority to circulate the proper quantity and quality of money.

6. Equilibrium in the Balance of Payments: 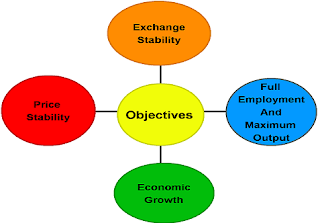 At DIGITALK WORLD, We Celebrate you Greatly.

at 3:29 am
Email ThisBlogThis!Share to TwitterShare to FacebookShare to Pinterest
Labels: Education