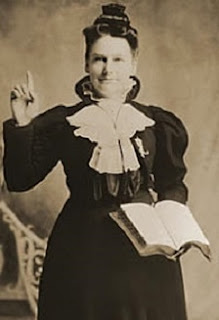 Maria (pronounced as if it was spelled Mariah) was born on July 22, 1844 to Samuel Lewis and Matilda (Brittain) Underwood. Her parents weren't Christians and therefore she had no religious education until her

parents joined the Disciple church in 1854. Her first loss occurred in 1857 when her father went out to the field to work but was carried back to the house with a severe case of sunstroke. Her mother was left with eight children and no support. Her mother and all the children old enough had to work to support the family.

When Maria was thirteen she heard the story of the cross at a Disciples meeting and was converted. Soon after she was converted she heard the voice of God tell her to "go to the highways and hedges and gather the lost sheep". This was confusing to her as the Disciples did not allow women workers. She thought that perhaps if she married a Christian man they could do missions work together.

A few years later she married her Philo Horace Woodworth. They attempted to farm but it was a failure. She had a son who died at a very young age. Maria then had another boy, Fred, who died, and she herself came close to dying. Georganna (Georgie), the second girl, was seven years old and she also became ill and lingered in terrible pain for several months, before she also died. Three weeks before Georgie died a little girl named Nellie Gertrude (Gertie) was born. However she only lived four months before she also died. Maria herself struggled with poor health and many times thought that she herself would die. There was one remaining boy and girl left to the Etters. Willie, the seven year old boy, became ill and died within a few days. All told within a few years five of the six Etter children had died leaving them in great grief and sorrow. Elizabeth Cornelia (Lizzie), the oldest girl, was the only child left to them.

The entire time she felt that God was calling her to preach to the lost. Finally a way was opened for her to speak at a Friend's meeting. When she got up to speak she was given a vision of the pit of hell and people not knowing their danger. She cried out for people to follow God and choose to be saved. Although she felt called to continue she did not know how to do that. She thought she would study but she had a vision where Jesus told her souls were perishing and she could not wait to get ready. Day and night she felt the need to call sinners to repentance. She finally started in her local area and began to see many conversions. The power of God would fall and sinners would run to the front in repentance. Eventually she held nine revival meetings and started two churches locally.

Due to the failure of the farm, Maria and her husband decided to start a traveling ministry. Maria preached wherever God called and moved through the Midwest where she gained a great reputation for the power of God coming into her meetings. Not long into her ministry she felt God calling her to pray for the sick. She was resistant to doing so because she feared that it would distract from the evangelistic call. Jesus assured her that if she prayed for the sick more people would be saved. She agreed and began praying for the sick. Her meetings were characterized by great power, healings, visions, and trances. In 1884 she was licensed as an evangelist by the Churches of God Southern Assembly, which had been founded by John Winebrenner. Some of her meetings had over 25,000 attendees. She traveled with a tent and set it up where God gave her opportunity.

1890-1900 were tough years for Maria. The dramatic occurrences in her meetings and life made her ministry highly controversial. She had resistance from both the religious and secular community. She was arrested in Framingham, Massachusetts for claiming to heal people, but was released when many came forward with their testimonies. In St Louis, Missouri she had some of her most dramatic meetings in 1890 and 1891, but local psychiatrists filed charges of insanity against her for claiming that she saw visions of God. In one of Etter's meetings in 1890 an man named Ericson prophesied that San Francisco and Oakland would be devastated by an earthquake and tidal wave on April 14th. This created quite a stir and the group was given extensive (negative) media coverage. April 14th came and went without the promised destruction. Ericson was institutionalized in a psychiatric ward for his prophesy and the Etter group left town. (It is interesting to note that a major earthquake did occur in San Francisco on April 18, 1906. Etter and many of her supporters felt that they had been vindicated about the 1890 prophesy.) By the late 1880s Maria and Philo were separated. Philo was drinking, sleeping with women who came to the meetings, and sometimes actively tried to stop her meetings. In 1891 Maria divorced her husband for infidelity. He was bitter and threatened to write a critical book about her ministry if she did not pay alimony. He remarried quickly and then died within a year of the divorce of typhoid fever. Maria continued her ministry with friends and associates. Even her own denomination struggled with what was happening in her meetings and she came under considerable pressure to stop. In 1900 she finally bowed to the pressure and gave up her Evangelist's license in the Southern Eldership of the Church of God. She was on her own.

Maria traveled extensively and met Samuel Etter in 1902 in Arkansas. They married and worked together for next several years. It is clear that Maria knew about the Azusa Street meetings and later talked about her approval of the power of God shown there. In 1912 she and Samuel ministered at a five month long meeting in Dallas, Texas for F. F. Bosworth. This meeting was widely reported in Pentecostal newsletters and her ministry blossomed from that point on. Pentecostals considered that many of the unusual things she'd experienced made Etter a forerunner in the works of the Holy Spirit. She was well known by John G. Lake who called her "Mother Etter" in his sermons. She continued to travel and minister, but Samuel became ill and eventually died in August of 1914. The strain of her husband's illness and then loss, coupled with a grueling three meeting a day ministry schedule caused Maria to become ill herself with pneumonia in November 1914. At 67 she was feeling herself close to death but God gave her a vision of Himself as the conqueror of death and disease. He showed her she wasn't done yet. By the end of January 1915 she was back on the road ministering again.

Finally in 1918 God called her to start a church in Indianapolis. She used it as a conference center, and often traveled from there to minister and preach in the mid-west. Her health declined, and she died on September 16, 1924, honored as a woman of God. She is buried in a grave in Indianapolis next to her daughter and son-in-law. Her inscription reads "Thou showest unto thousands lovingkindness." She was survived by her granddaughter Beulah and husband Earl Clark, who were also Pentecostal ministers. 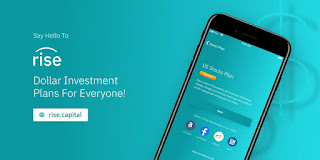 at 1:50 am
Email ThisBlogThis!Share to TwitterShare to FacebookShare to Pinterest