World’s Rarest Stamp Bought For One Cent at British Colony Sells for £5.6MILLION at Auction 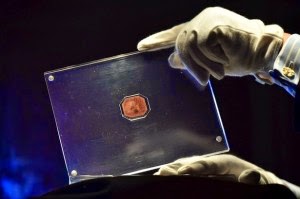 The world’s rarest stamp has sold at auction for a record-breaking $9.5million (£5.6million).
Murderer John du Pont once owned the collectible which measures just one inch wide.
The sale makes the one cent stamp, now worth the equivalent of £5.6million, the most expensive stamp to ever be sold - at almost a billion times its face value.
It was originally created by the postmaster of British Guiana, once a British colony in South America, back in 1856 when a shipment of stamps was delayed from London.
At the time it was one of three to be created and is thought to be the only one left in circulation. British Guiana is now known as the independent nation of Guyana.
Over the years it has had a number of owners, the last being John du Pont, heir to the du Pont chemical empire, who was convicted of murdering Olympic gold medal-winning wrestler David Schultz in 1997.
Du Pont will be portrayed by Steve Carrell in a film, Foxcatcher, which is set to be released later this year.
He died in prison in 2010 aged 72 and it has been reported 80% of the proceeds from the stamp’s sale will go to the family of his wrestling friend Valentin Jordanov Dimitrov.
The remaining 20% will go to the Eurasian Pacific Wildlife Foundation, which he supported.
David Redden, vice chairman of Sotheby’s, said: “This stamp is the Mona Lisa of philately – it is not the finest stamp out there but it has captured the imaginations of collectors around the world.
“It is the most famous stamp in the world and the most sought after. It is iconic in stature.
“We are thrilled with the extraordinary, record-setting price of $9.5million – a truly great moment for the world of stamp collecting.
“That price will be hard to beat, and likely won’t be exceeded unless the British Guiana comes up for sale again in the future.
“I have to say I’m a little sad to see it go – when I was eight years old this was the most precious object in the entire world, and I never dreamed I would have it in my hands.
“This stamp has been a legend ever since the 19th century.”
The auction at Sotheby’s in New York on Tuesday night lasted just two minutes. It was sold to an anonymous private collector.
The previous auction record for a single stamp was 2,875,000 Swiss francs – or two million pounds – paid for the Treskilling Yellow in 1996.

Get up to $20 worth of either Amazon, Apple, Nike or Tesla stock when you sign up

at 2:41 am
Email ThisBlogThis!Share to TwitterShare to FacebookShare to Pinterest